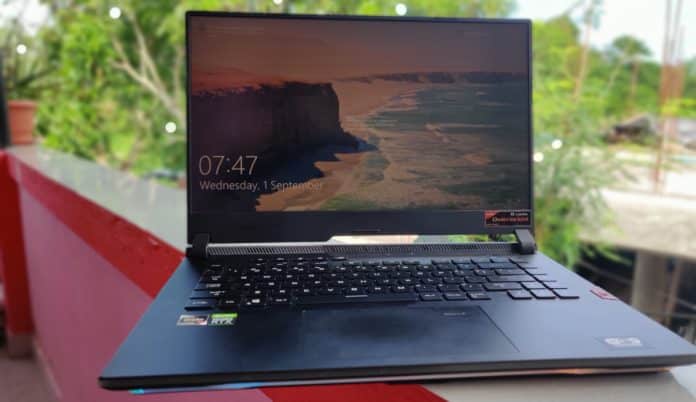 Recent months have seen an increase in the PC gaming market. Gaming laptops are becoming more popular as desktop GPUs become increasingly expensive. The reason for this is that ASUS felt the need to introduce a slew of new gaming laptops under their ROG brand. The new ASUS ROG Strix G15 is one of the more intriguing options in the lineup. But is it worth buying, let’s find out?

DISCLAIMER: ASUS HAS SENT US THE PRODUCT FOR REVIEW. HOWEVER, THE COMPANY DID NOT INFLUENCE OR TAMPER WITH THE REVIEW WHATSOEVER, IN ANY MANNER.

The ASUS ROG Strix G15 screams “gaming” from every conceivable angle. The ROG emblem on the lid and an RGB strip across the laptop’s bottom both light. Additionally, the keyboard has RGB backlighting. These lights greet you and awaken the gamer inside you as soon as the laptop boots. 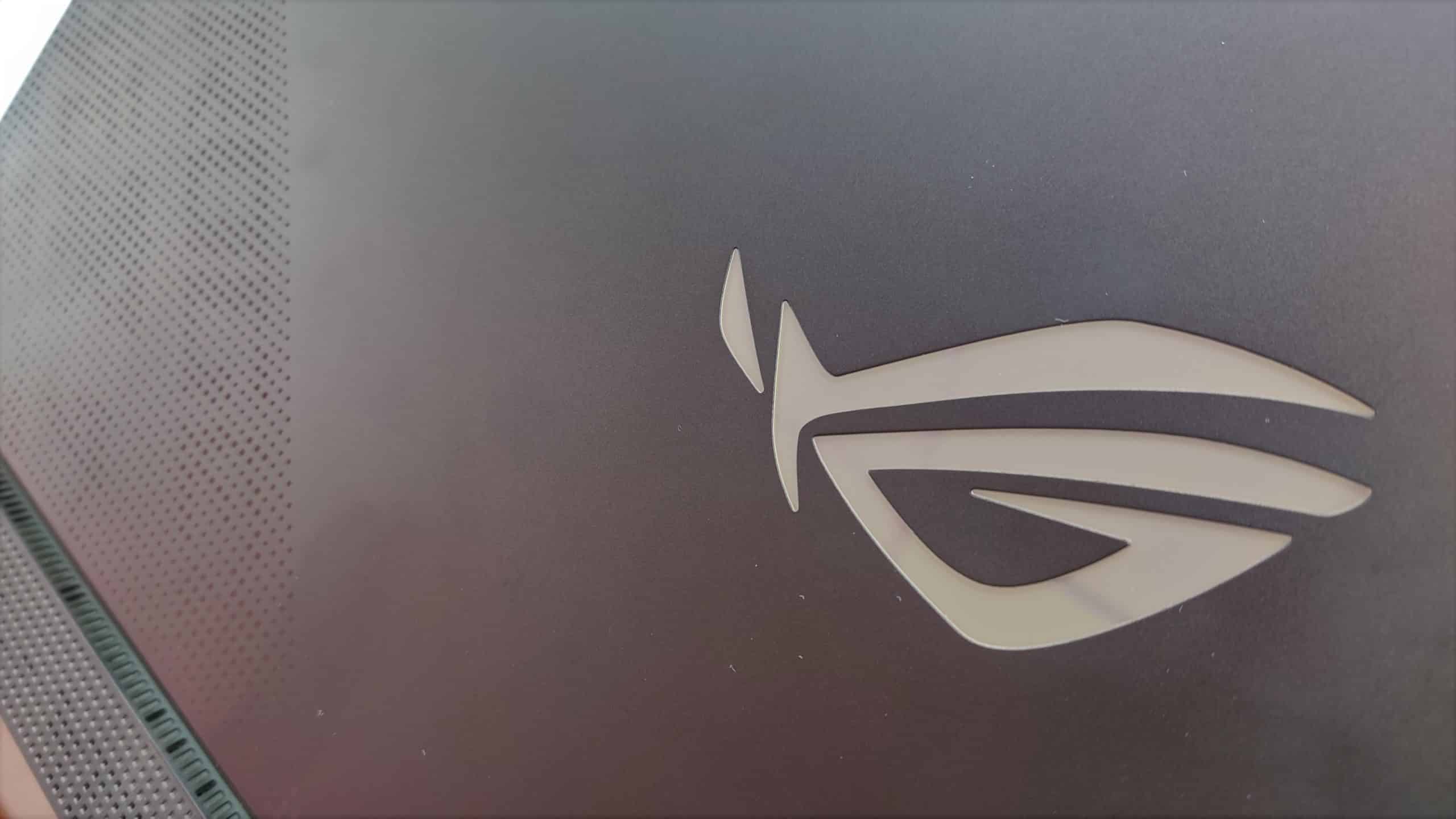 The Strix G15 is composed mostly of plastic, which detracts from the overall build quality. Laptop’s aluminium lid alone; the rest of the chassis is composed of cheap plastic. However, despite this, the laptop has a substantial feel about it. On the lid, there was a little bend, but nothing alarming.

The Strix G15 comes with two USB Type-A ports on the right and a headphone jack on the left for connectivity needs. With no ports on the right, you’ll only find the HDMI and USB Type-C ports on the rear. There’s also an Ethernet connector and a charging port on the back as well. By putting the additional ports towards the rear, users will be able to keep their desks neat and tidy while gaming.

ASUS has started removing the camera from its gaming laptops recently. The Strix G15 doesn’t have a built-in camera, however, ASUS includes a USB webcam in the package as an alternative (we didn’t see it on our unit).

The 15.6-inch Quad HD IPS display on the ASUS ROG Strix G15 has a 165Hz refresh rate and a 3ms response time. As impressive as it may seem, the 1440p panel on a 15/6-inch screen makes no apparent improvement in terms of visual quality. Aside from that, the laptop’s 165Hz refresh rate enhances gaming performance. 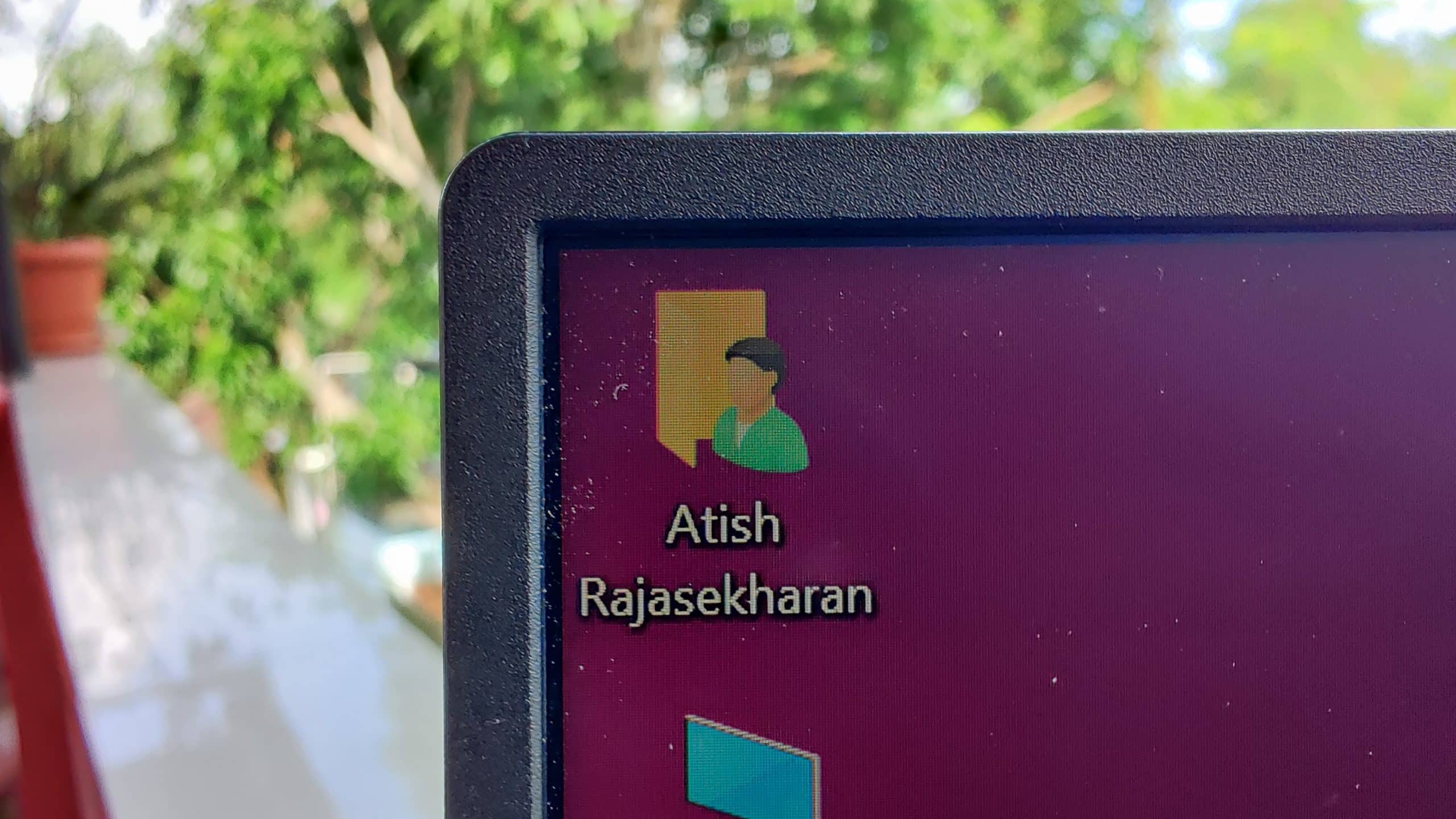 On the other hand, when I set the brightness all the way up, I observed that the blacks weren’t as deep as they could be. This could be because of the LCD panel, but it could also be because of an increase in contrast. That said, the minimal bezels around the display provide an immersive content consumption experience.

The ROG Strix Scar 15 laptop’s optical-mechanical keyboard is the standout feature for me, over and above the performance and display. The key clicks felt good, and the key travel was generous. This simplified the process of participating in first-person shooter (FPS) games enormously.

Similarly, the trackpad is enormous and surprisingly responsive. Instead of a NumPad, which is standard on keyboards, a digital NumPad has been included into the trackpad. However, this isn’t a brand-new feature for ASUS; it’s been there for a while on other ASUS laptops as well. Using the digital NumPad is the same as using a physical NumPad. The trackpad has a fast response time, is dependable, and is highly accurate.

The ASUS ROG Strix G15 is a performance behemoth. The Ryzen 9 5900HX CPU and Nvidia RTX 3070 mobile GPU power the gaming laptop, the best of both worlds. The laptop’s performance is on par with certain gaming desktop computers thanks to its high-end specs. 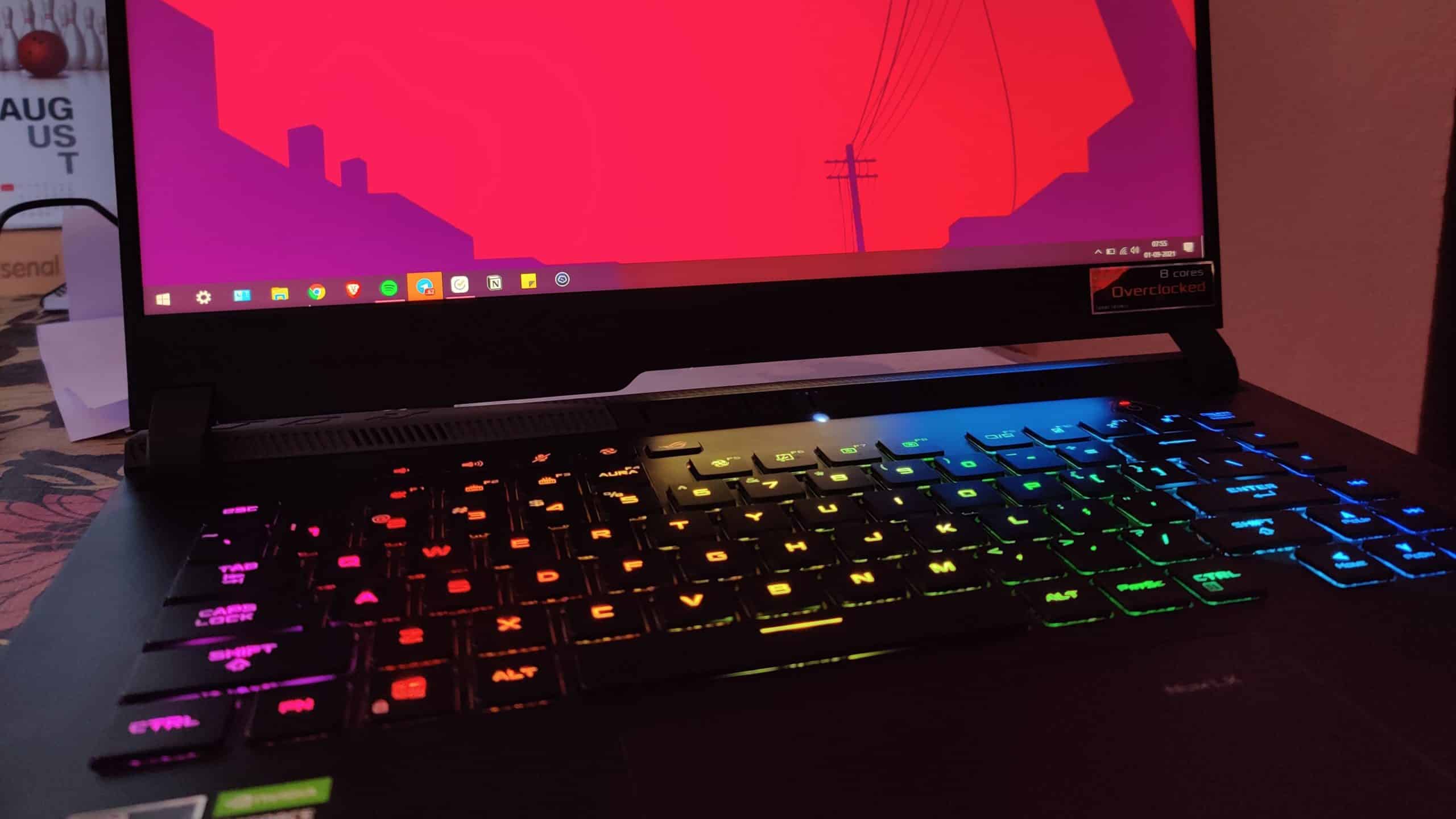 I played Gears 5, Counter-Strike: Global Offensive, Valorant, and Battlefield V during the evaluation period. All of these games ran flawlessly on the laptop, with no glitches whatsoever. In terms of performance tests, Cinebench R23 gave the laptop a score of 12023. And we got 3653 on single-core and 24642 on Multi-score, on Geekbench 4. 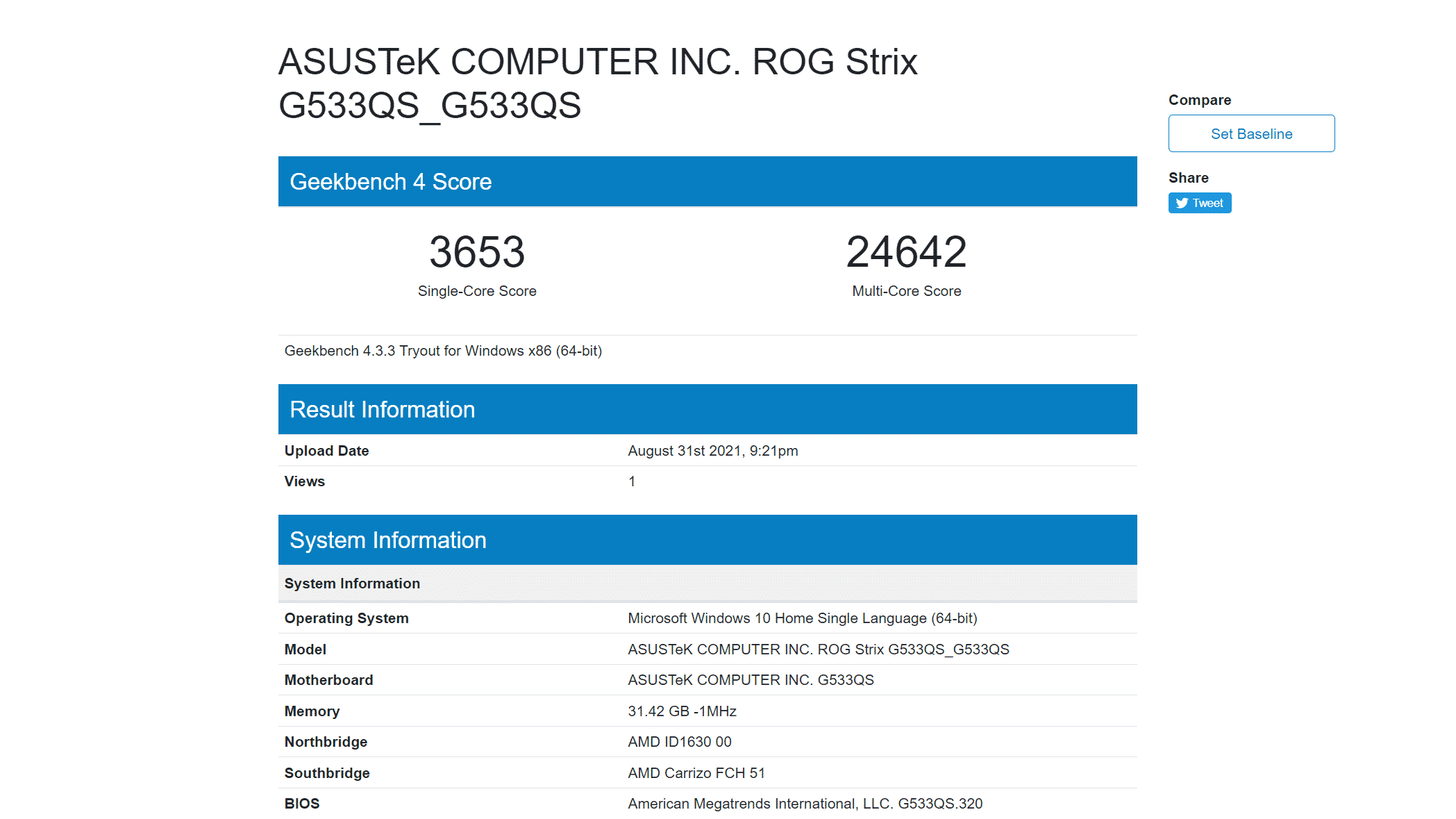 I had no issues running three instances of Google Chrome at the same time, each with 10-12 tabs open. I even had Telegram, Spotify, Steam, and Microsoft Word open in the background. Even though I had a lot going on at once, the laptop ran silky smooth.

When it comes to the battery, the ROG Strix G15 has a 90Wh battery, which is a significant boost over the 66Wh battery of its predecessor. I got roughly 4 to 5 hours of use out of the laptop while I was doing a lot of surfing with a lot of tabs open and watching Netflix. 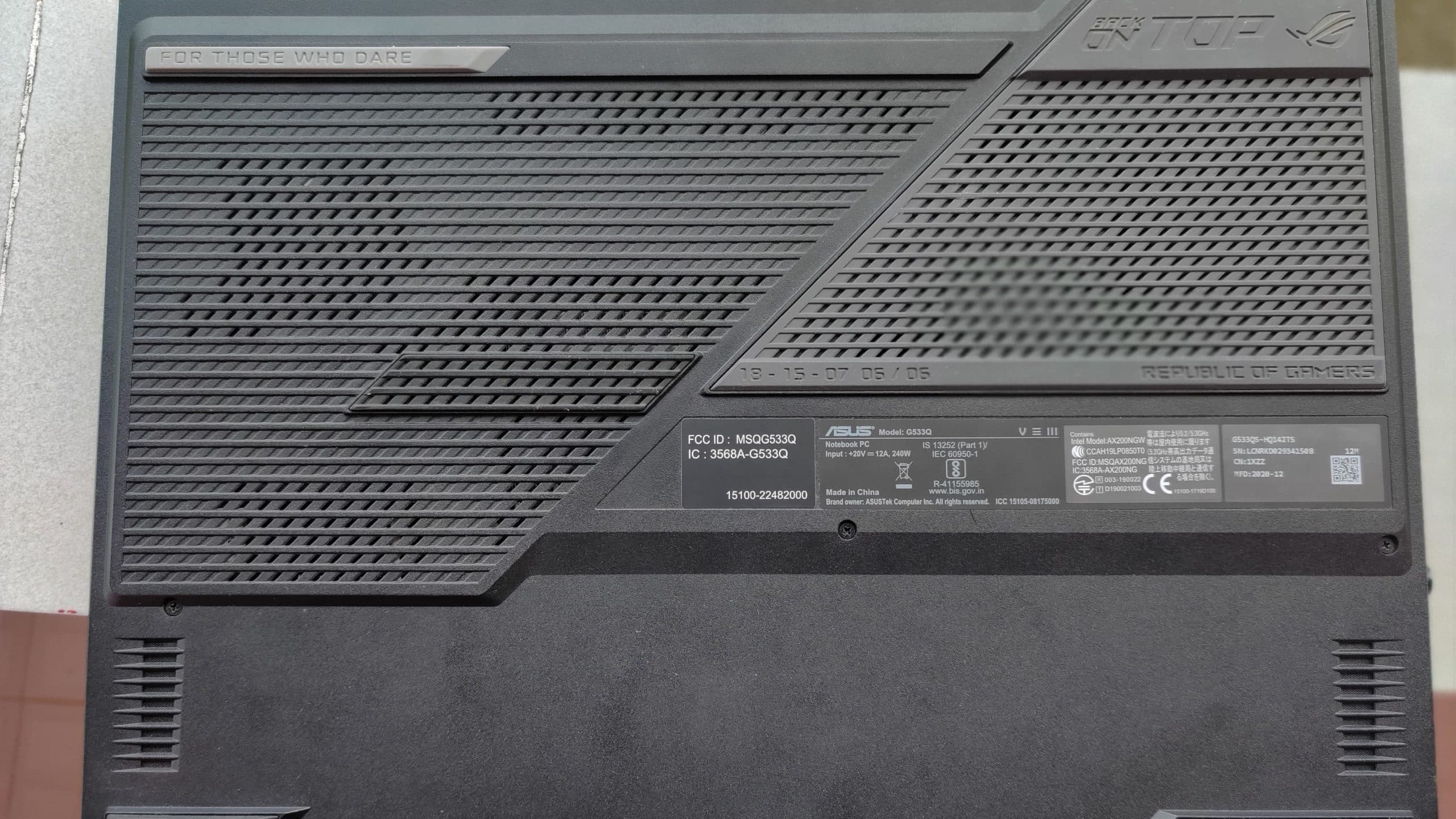 And, I only got roughly 1.5 hours of battery life when gaming, which is to be anticipated since that’s when the laptop was using the majority of its available power. The laptop comes with a 240W charging brick, which takes roughly two hours to charge the whole battery. The laptop performed surprising well in heat test. When it comes to heat management, ASUS has outdone themselves with this computer.

The ASUS ROG Strix Scar 15 gaming laptop is a colossus in and of itself. It’s a wonderful gaming PC, but with GPU costs skyrocketing, putting one together for less than Rs. 1,64,999 is out of the question. 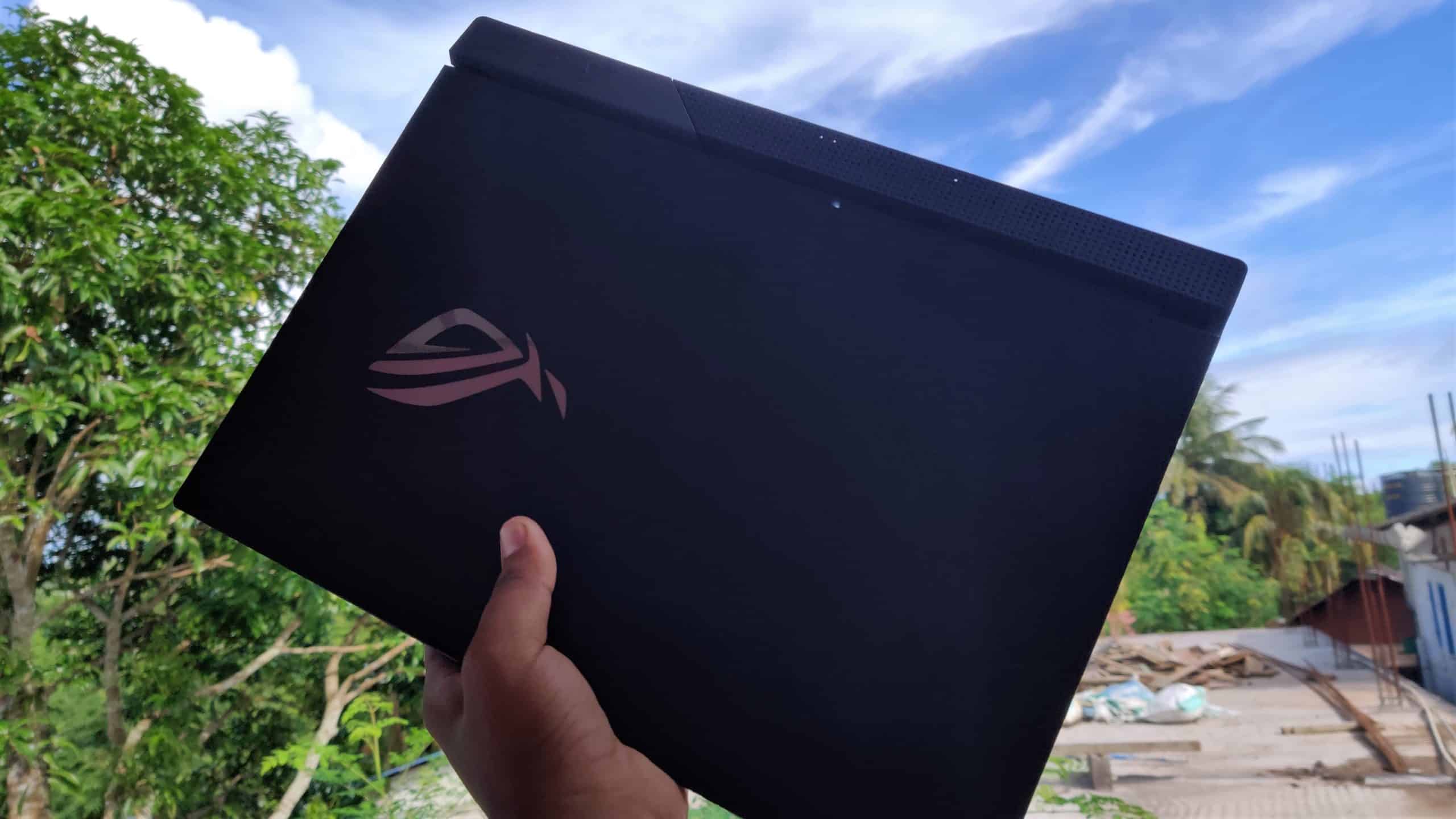 Overall, I think this laptop is a monster; it’s the kind of thing you could drive for five years straight and still be productive. Overall, if you want a Windows PC for gaming, this may be a good option.