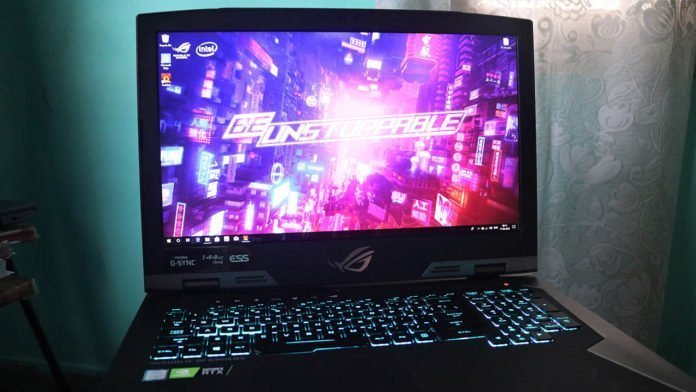 Gaming laptops have evolved to a level that companies started making monstrous machines which can slay any latest games thrown at it. Depicted well with ASUS ROG G703G, one of the bulkiest and most expensive notebooks we have ever reviewed. But how worthy is it? Let’s find out in this review.

The ASUS ROG G703G is powered by Intel Core i9-8950HK along with Nvidia GeForce GTX 2080, and matte IPS FullHD 144Hz G-Sync monitor, which is more than enough to fluidly run the most demanding games available in the market. 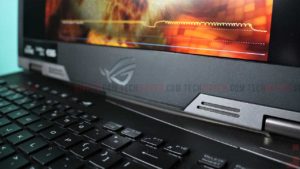 It is no wrong to say that, this is one of the most rock-solid performing laptops from ASUS. However, it isn’t perfect. 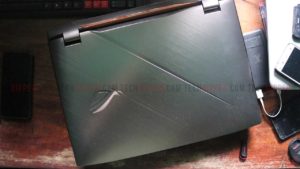 At the very first look of ROG G703G, you can determine that this is for die-hard gamers. The design of the laptop is a mixture of machined, gunmetal aluminum and matte black plastic. The lid is shiny with burnt orange metal and has a ROG logo on it which illuminates parallel to the RGB LEDs on the keyboard.

The ROG G703G is pretty solid in terms of build quality and ergonomics. We have faced any keyboard or lid flexing. The G703’s loud looks are accompanied by a formidable size, coming at around 50mm thick, which is huge. Clearly, it is tough to carry, however, the company provides a bag along with this laptop, for easy carry.

The ROG G703 sports thick bezels, unlike the ROG Strix Scar II, which we have reviewed a while ago. Does it affect media consumption and gaming? yes, coming from a near bezel-less display, it affected me to some extent until I got to used to it. Well, apart from that, overall the laptop has a great design and a gaming look to it.

The ASUS ROG G703G has all the basic ports; there are four USB 3.1 connectors, a USB Type-C jack, a mini-DisplayPort, HDMI and Thunderbolt. There’s also a card reader and even an Xbox wireless receiver, for seamless gameplay. 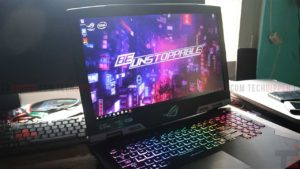 Aside all, the display on ROG G703G is accurate and bright indoors, but it suffers a bit outdoors. However, the display has a good combo of color, contrast, and vividity. We played PUBG, Battlefield V, and Far Cry 5, and all three games feel smooth on the 17.3-inch display.

“With nvidia g-sync and 144HZ REFRESH RATE ON THE ASUS rog g703 takes gaming experience to another level.”

The keyboard on ROG G703 is fairly huge and well-spaced, seemingly giving out a sweet typing experience, with key travel of 2.5 millimeters. and 0.3mm keycap curve. 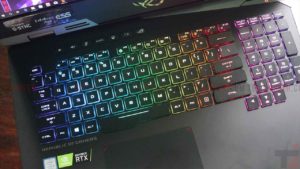 The keyboard is also RGB backlit and is backed by Overstroke technology. The keyboard features a dedicated volume key, a key to mute the microphone, Aura key, Xbox key, Xsplit Gamecaster, and Armoury Crate. 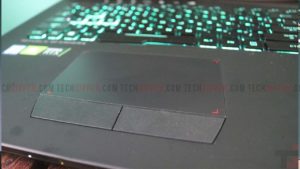 Coming to the trackpad, the touchpad was pretty good and precise, thanks to Microsoft’s Windows Precision Drivers.

Its buttons are fast and light, however, we find it kind of mushy with drop-in the overall experience and possibly why the company also bundles a ROG gaming mouse with the laptop. 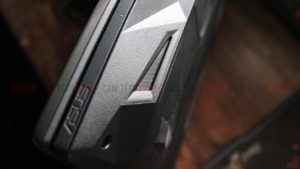 Mind you, these speakers are not best in class and possibly for that, ASUS provides you with a gaming headphone with it, which acted good in terms of overall sound exposure. 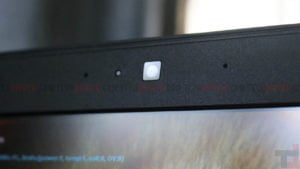 Well, the laptop comes with an HD 720P webcam on this laptop gives out a realistic experience with colors, however, the quality isn’t appreciatable. Overall, the webcam is decent, if not poor. 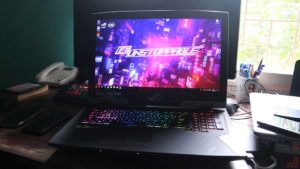 ROG G703G houses a 3-cell Li-Polymer 71WHr battery but don’t you forget this is still a gaming laptop and the battery life was mediocre. We managed to reach around to 2 hours 33 minutes of usage backup on a single charge with 70-80 brightness, docs files opened, Chrome (10 tabs), minor photo editing in Lightroom and YouTube videos. 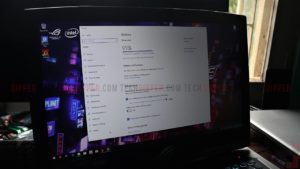 While gaming, not more than an hour. Evidently, it is not the best battery life you can get actually, but it should be enough to get you through. 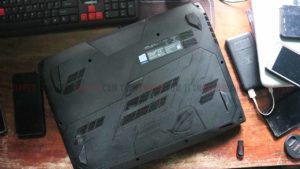 The G703’s size means that this laptop copes with its powerful components and during our stress test, the battery level peaked at 73°C, however, it got stabilized at 68°C, thanks to the intelligent dual-fan design with upgraded 12v fans. 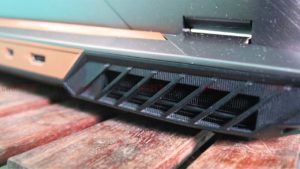 The G703 also sports self-cleaning anti-dust tunnels and the airflow-optimized quad-outlet chassis. Not just, it also features liquid metal 13°C cooler CPU temperature. At its peak, the fan isn’t quiet, however, it won’t bother you much.

After using and gaming for over two weeks, we cannot deny the fact that the ROG G703G is featured-packed and strongly build for pro gamers, especially considering the fact that it packs in the latest RTX-series of GPU along with a brilliant 140 Hz display, and powerful internals. 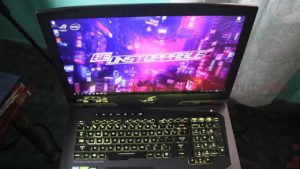 The ASUS ROG G703GXR is priced at Rs 3,99,990 (on Flipkart.com), yes, the laptop is expensive but if you are a gamer then this is a long-term shot. For some who want a portable gaming machine, ASUS ROG G703G isn’t the one, prefer going for ROG Strix Scar II.