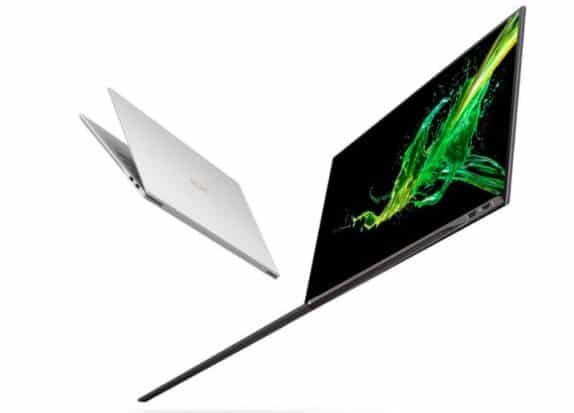 Acer announced its new laptop- Acer Swift 7 and a new Chromebook 315 which is the first AMD-powered Chrome OS device. The Swift 7 comes with a remarkable 92% screen-to-body ratio with bezels measuring just 2.57 mm. It comes with two USB Type-C ports supporting Thunderbolt 3, as well as USB 3.1 Gen 2. The DisplayPort 1.2 provides fast data transfers at up to 10 Gbps. The camera has a 55-degree angle of view and features high-dynamic-range (HDR). The power button doubles as a fingerprint reader for password-free Windows Hello secure login.

Along with Acer Swift 7, the company also announced the Chromebook 315 which is the world’s first AMD-powered Chrome OS device. It packs in a 15.6-inch Full HD screen display with 178-degree viewing angles and wide 88-degree field-of-view, powered by the 7th Gen AMD A6-9220C or A4-9120C processors with Radeon graphics.