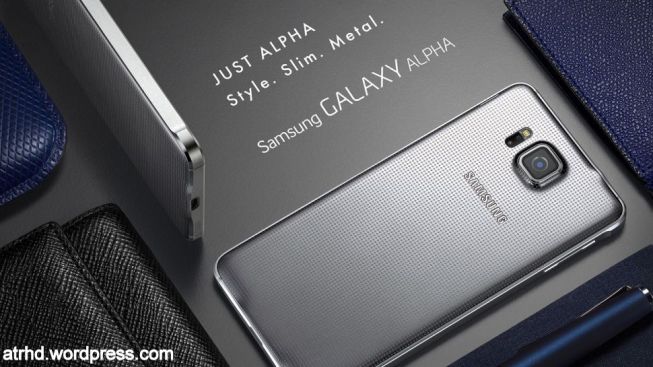 After a welcome identity boost, the A-series returns. The Galaxy A7 is a slim, light, metal-trimmed phablet to offer an alternative to the Galaxy Note 4 and other premium phablets.

Like its fellow Samsung flagships, the Galaxy A7 has a Super AMOLED screen, 5.5″ big with 1080p resolution. It’s powered by either an Exynos 5430 (like the Galaxy Alpha) or a 64-bit Snapdragon 615. In either case you get a 13MP main camera and a 5MP selfie camera.

The Galaxy A7 features a rigid metal frame and the entire body (except for the camera bump) is just 6.3 mm thick. The low weight doesn’t make the phone feel any less solid.

The difference is mostly tactile though, looks-wise we’re pretty much at the Galaxy S III, as the camera/LED/loudspeaker arrangement is a direct copy of the 2012 flagship. The hardware keys below the screen, the earpiece above it, all came out of the Galaxy parts bin.

Even the color selection – Pearl White, Midnight Black and Champagne Gold – is the industry standard color selection. At least the metal frame and the plastic elements are painted a consistent color.

The metal frame goes around the sides of the Galaxy A7. The Gorilla Glass 4 that covers the screen is slightly sunken so it catches your finger every time you have to do an edge swipe.

Above the screen is a 5 MP selfie camera with a wide-angle, 106° camera. Wide selfie mode works like a panorama to make even wider photos. You can also create animated GIFs of your mug. The camera can detect a raised, open palm and will start a 2-second timer or you could tap the screen to take a photo.

The metal trim on the Samsung Galaxy A7 is where all the ports and slots are. The right side is quite busy with a Power key and two card slots. On our dual-SIM device, both slots use nanoSIM’s and require an ejector tool to open.

As a premium Samsung device, the Galaxy A7 gets the Super AMOLED treatment. The screen has 1080p resolution and is a bit smaller than the Galaxy Note 3’s screen, 5.5″ vs. 5.7″. The difference in surface area is under 8%.

the screen has just over 400 ppi. Even with Super AMOLED’s Pen Tile matrix that’s more than enough.

The Samsung Galaxy A7 comes with a 2,600 mAh battery – the same size as the battery in a 5″ Galaxy S4 and practically the same as the 5.1″ Galaxy S6 battery. That’s not a lot to feed a 5.5″ screen and an octa-core processor, but it’s the price you pay for the 6.3 mm thinness. Plus, the Galaxy Alpha did quite well on a tiny battery.

The Samsung Galaxy A5 runs on the latest available Android 4.4.4 KitKat enhanced with the TouchWiz UI. It offers graphical themes. However, this version of the software doesn’t stray too far from the TouchWiz looks that have defined Samsung software.

The Samsung Galaxy A7 features One handed operation. The basic mode squishes the on-screen keyboard horizontally so you can reach all keys with the thumb of one hand. You can place a panel of on-screen alternatives to the hardware keys if you find reaching those hard.

The all-in option shrinks the whole screen and puts on-screen buttons underneath so you can effectively use a smaller screen.

The Samsung Galaxy A7 pays more attention to the front-facing selfie camera than it does the main camera. That one is fairly standard, taking 13 MP stills and recording [email protected] video. The selfie camera is a 5 MP shooter with a wide-angle 106° lens with several selfie-related features.

The UI is simple enough, though getting to the settings menu requires a few taps too many. You can pull out two shortcuts for easy access, though shooting modes are the preferred way to go – let the phone pick the settings for you.

The Samsung Galaxy A7 can capture videos at a maximum resolution of 1920 x 1080p at 30fps. There’s no smooth or slow motion videos at 60fps or 120fps even at lower resolutions but some might argue that FullHD is enough.

The front camera can record 1080p video too in both landscape and portrait orientation.

FullHD videos are recorded at 17Mbps with a stable 30fps framerate. Sound is captured in stereo at 256Kbps bitrate and 48kHz sampling rate.

The videos capture a good amount of detail though it’s not the best 1080p shooter. White balance is more accurate. The continuous autofocus tends to trigger too often.

The phone cost around 26,000 in Flipkart and Amazon.

Personally, I think this phone sounds awesome and will be a great contender for the devices at this price range but what do you think?? Are these specs enough to convince you to upgrade your Phone?? Is there anything missing that you’d like to see added?? Let me know all your thoughts in the comments below and check back soon for more information on upcoming devices.